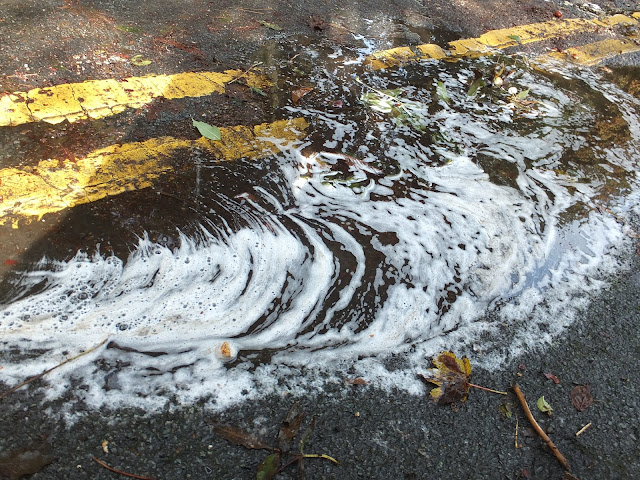 Walking down Demesne Road by Alex(andra) Park in Moss Side I noticed that several of the puddles were remarkably frothy. It has been very rainy in Manchester lately (as usual). My first thought was that someone had been washing their car by the roadside. I quickly realised that the frothiness came from conkers that had been crushed by passing cars. Later cars then ran through the puddles and whipped up the suds. All of the pictures are from yesterday.


The horse chestnuts have been very productive this year despite suffering from disease. They have obviously been enjoying the heat and abundant rain. 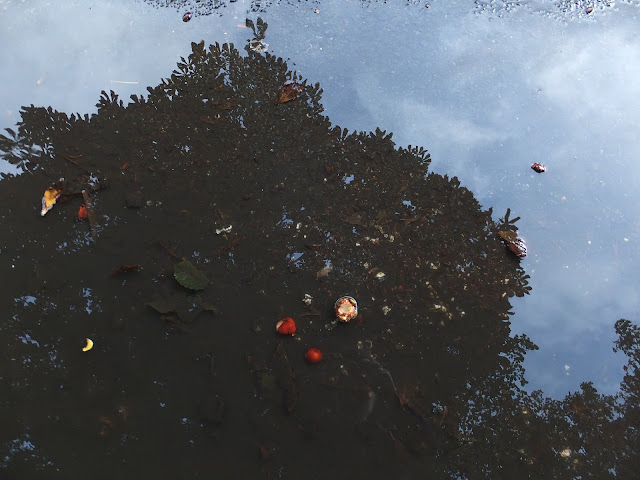 The frothiness comes from the mixture of saponins that the seeds contain, called aescins. Though Americans might call them escins. Saponins are named from the soapwort plant (Saponaria officinalis). The name of the plant came from the Latin sapo, meaning soap. Saponins are long molecules composed of a water-loving sugar section at one end joined to an oil-loving steroid or terpenoid section. Soap molecules also have one end that loves water and another that loves oils. They act like soap in making an emulsion of oily substances in water with a layer of saponin mediating between the two substances. 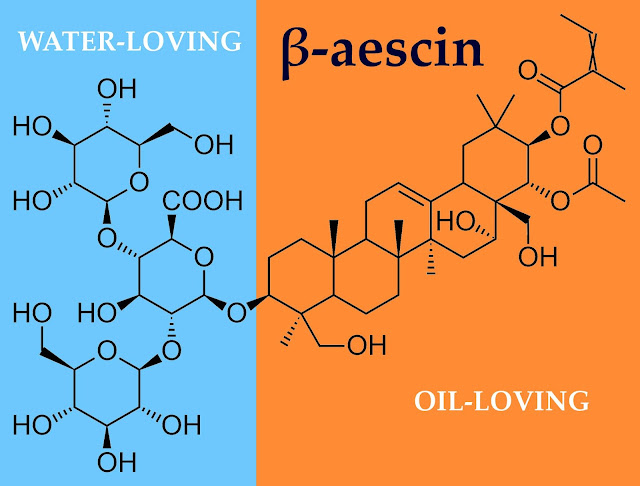 The main form of aescin found in horse chestnuts,
showing why it is soapy. My colour and annotation on
an original from Wikipedia by Fvasconcellos.

The frothy water forms when there is no oil present because the saponin in water forms a relatively stable, flat bilayer, two molecules deep with the water-loving ends facing outwards on both sides. When air is agitated into the water these films can capture the bubbles of air. 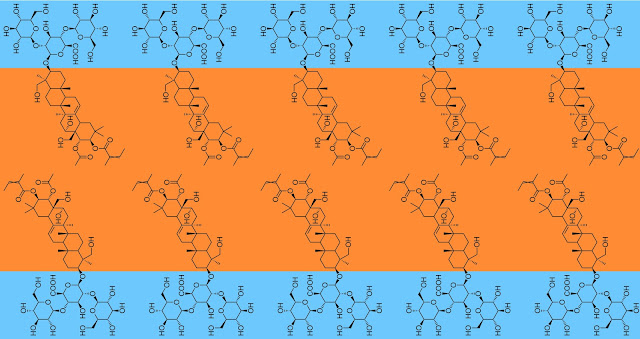 A slice through the flat film formed by a double layer of β-aescin.
"Artist"'s impression, not based on rigorous science.

Saponins are toxic to fish and have been used as fish poisons to harvest fish from ponds in many parts of the world. Hopefully these large puddles of conker soup will break down before the saponin reaches Manchester rivers.

Because of the aescin content the conker has been used in medicine, especially for treating varicose veins and haemorrhoids. The dried seed may contain up to 28% of aescin saponins. It should be used with caution internally as it can cause some side-effects such as stomach irritation and can cause problems if it enters wounds. It has been recommended in baths for tired muscles. The saponin can be made into a concentrated extract by using boiling water on the crushed white part of the seed. Saponins are generally much more soluble in hot water than cold. 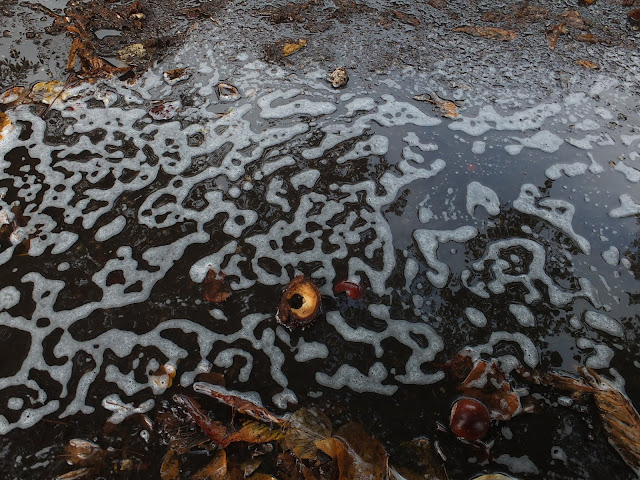 Horse chestnut is in the family Sapindaceae. The name of the family comes from the genus Sapindus, derived from the Latin for soap (sapo) and "of India" (Indus). Though later species were found in the Americas, the first discovered by European botanists was found on the Malabar coast of India.  The family also contains the delicious tropical fruits called litchi, longan and rambutan and the disgusting high-caffeine health shop flimflam guarana. From DNA evidence, the Sapindaceae has now been widened to include maple trees.

Many plants that contain large amounts of saponins have been used and are still used around the world as mild soaps and shampoos, like conkers were in Europe. They come from diverse plant families.

Just a few of the more popular examples:

Some decades ago, I had a shampoo made by Zoroastrians that was purely soapwort extract in a little water. It was not as frothy as synthetic shampoos but did lather and left my hair very happy. I have not been able to find it since. 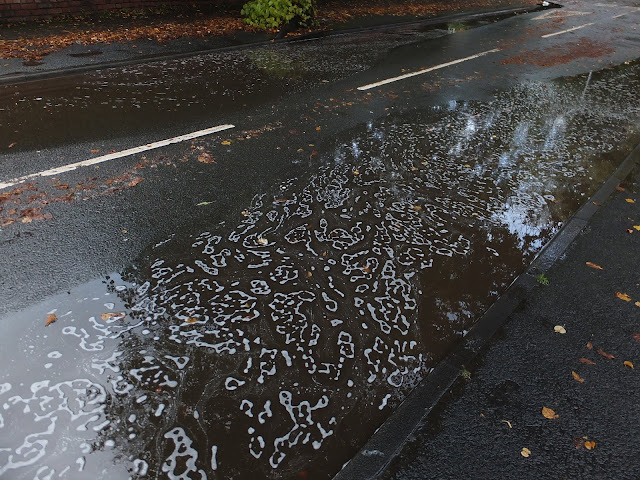 All of the European horse chestnuts (Aesculus hippocastanum) in Manchester appear to have been suffering from one of the new diseases that have recently arrived. I think this one is the horse chestnut leaf-miner though some other diseases look similar.  The leaf-miner has spread north and west from Wimbledon, where the moth was first found in the UK in 2002. Luckily the horse chestnut leaf-miner (Cameraria ohridella) only affects the leaves later in the year and the tree does not lose the ability to feed itself entirely. Apparently the other species of Aesculus grown as ornamental trees are less affected by this moth. I think I have seen the red-flowered Aesculus x carnea in Manchester parks. 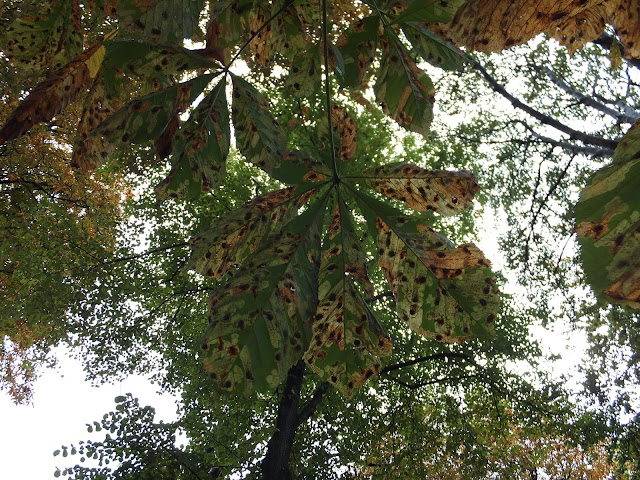 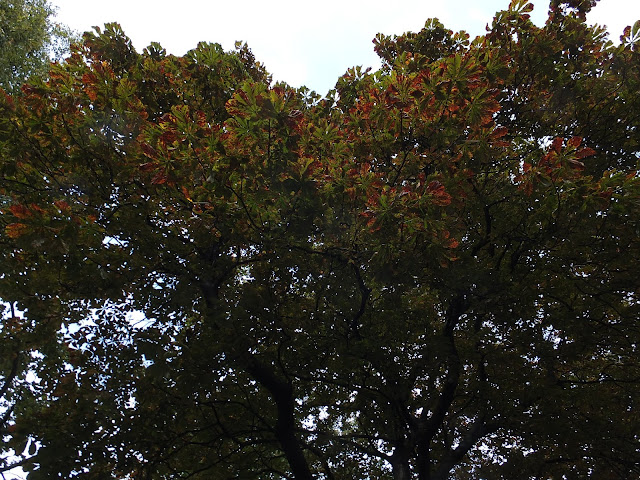 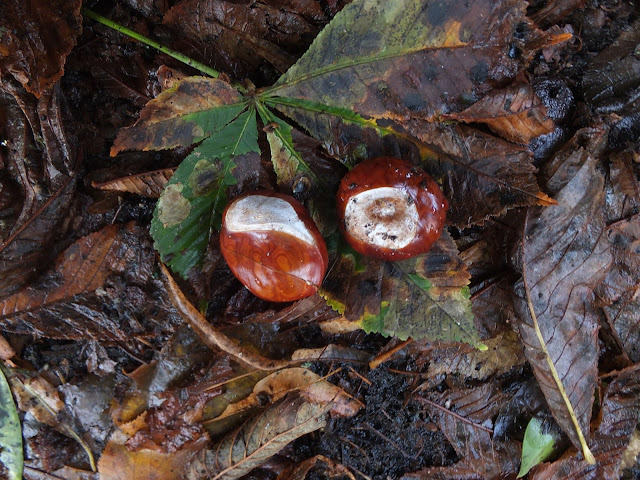 The horse chestnut tree is most famous for providing the conkers used by schoolchildren in Britain in gladiatorial combat. The name came from the earlier tradition of a game involving snail shells, where they were called "conquerors". The annual World Conker Championship is held at Southwick in Northamptonshire. Hopefully they will have better weather than last year. 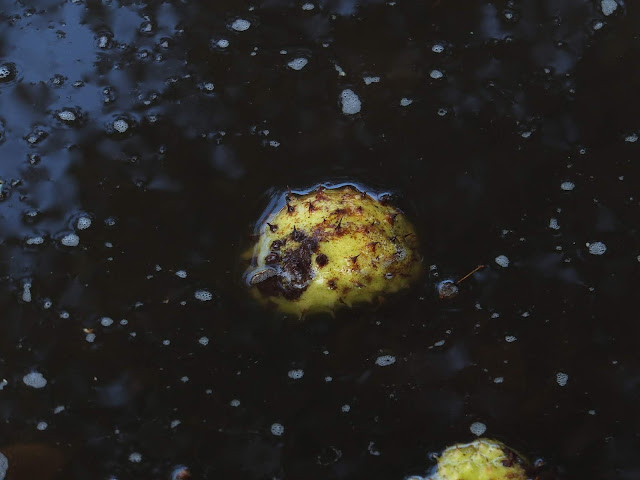 The spiny shell of the conker.

The Latin name aesculus was originally a type of oak tree whose acorns were edible. It may be hard to believe an acorn could be edible but some trees of the holm oak (Quercus ilex) have acorns that are as delicious as chestnuts when roasted. Some plant historians have identified the aesculus as Quercus frainetto and others as Quercus petraea. It is quite common for botanists to use the name of a plant from ancient Greek or Latin for the modern generic name of a completely unrelated plant.

The name horse chestnut appears to have been common to several languages of the native area of the tree, in the central mountain ranges of the Balkans.

The specific name hippocastanum is a direct translation of "horse chestnut" into latinised Greek, presumably by Linnaeus in 1753. Versions of the name were being used in Central and Western Europe quite soon after the tree first left the Ottoman Empire in the late 16th century so we don't know which language Linnaeus was translating.

Some authors cast doubt on the name coming from the report of horse chestnuts being given to horses that have a cough. Some write that "horse" is just a way of saying inferior.

Willem Quackelbeen was physician to the Ambassador of the Holy Roman Emperor to Sultan Suleyman the Magnificent at the Ottoman court in Istanbul. In 1557 he wrote a letter to the physician/botanist Pietro Andrea Mattioli in Prague. Quackelbeen described the horse chestnut growing in Istanbul. This was the first description of the tree known in Europe beyond the Ottoman Empire. In both the following quotes the word, equinas/equinae, is an adjective, so I have translated it as "horsey".


A type of chestnut is frequently met with here (in Constantinople!), which is commonly given the nickname [or epithet/surname], horsey, since three or four devoured, are good against chest diseases of horses, particularly cough and difficulty breathing.

Mattioli reported this as:


Horsey these chestnuts are called by Istanbulis, in difficulty breathing, a bad cough horses are brought much help if they devour them.

The name for the tree in Turkish is still at kestanesi, literally horse chestnut.

In 1879, more than 320 years later, Theodor von Heldreich (the director of the botanical gardens at Athens) was travelling in the mountains of Thessaly and Evrytania. In August he found wild populations of Aesculus hippocastanum. The Cornishman John Hawkins who had found them nearby in the 1790s had been ignored by botanists. Herr von Heldreich was informed that the trees were called "wild chestnut" by the locals. On the herbarium sheet that name is Ἂγρια Καστανηά (agria kastanea), if i read the awful handwriting correctly.

Theodor von Heldreich also heard that the use in horse medicine continued:


... and one also discussed and praised everywhere the healing power of the fruits, which are finely chopped and mixed among barley to give the horses an effective remedy for coughing (βἠχάς).

That seems pretty conclusive to me. I am prepared to believe that conkers were used to cure horse coughs by Balkan and Turkish horse handlers and that is why we call them horse chestnuts.

The leaves in the herbarium specimens collected from the wild by Theodor von Heldreich in 1879 have been shown to have the horse chestnut leaf-miner. Many of those old leaves had the actual caterpillars and chrysalids of the moths still inside. They were genetically fingerprinted and compared to the modern pest. So, we know that our cultivated horse chestnuts in Manchester now look just like the original, wild horse chestnuts, complete with a pest that evolved with them in the mountains of the Balkans. 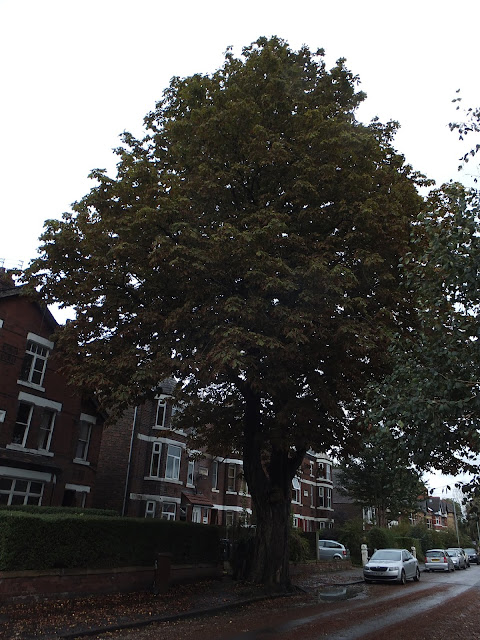 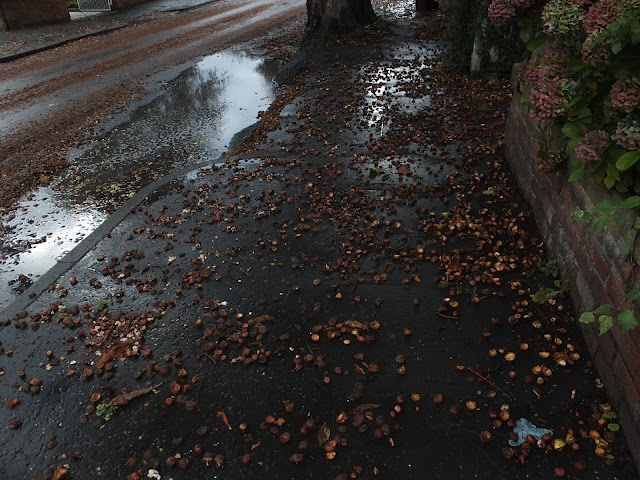 The pavement under the tree on Manley Road,
littered with conker fruit and seeds. 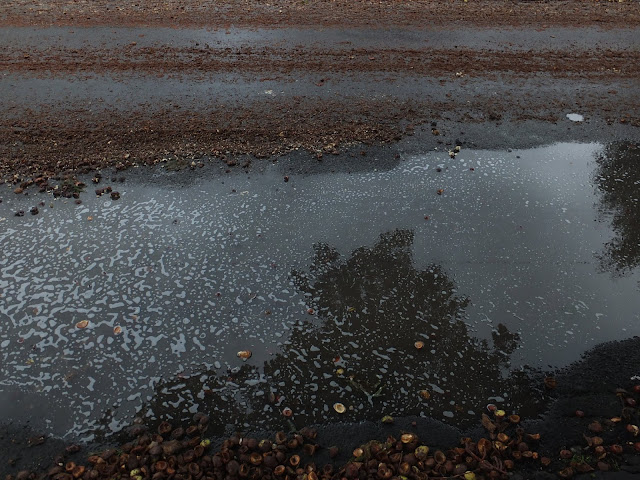 The frothy puddle under the Manley Road tree and
a road covered in crushed conkers. 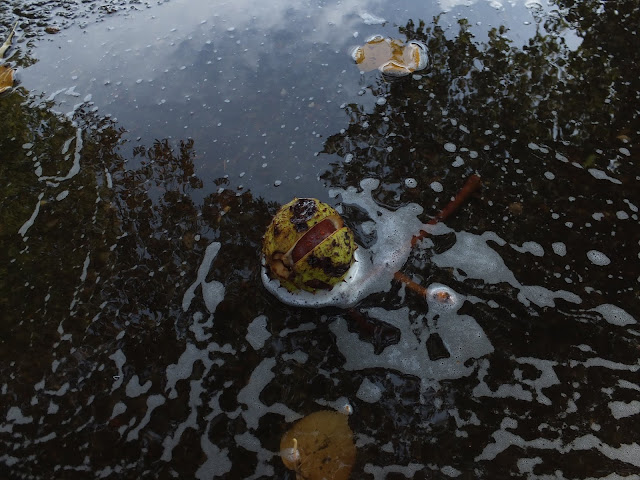