Obscure sources of Dragon's Blood and other bloody trees.

I am putting together some articles about plants that have provided substances called Dragon's Blood. I aim to write four separate articles on the main types - members of the bean family, Croton from the Euphorbia family, Daemonorops rattan palms and Dracaena dragon trees.

This article is a miscellany of the odds and ends of other trees I have encountered while looking for those main four groups. Some are called dragon's blood in their areas and some are just bloodwoods. These articles are going to be lists of the various plants with a few details on each, not exhaustive monographs on each plant. The article on Dracaena will be more in-depth, as there is a lot of information on those trees.

A surprising number of these trees grow in swampy or frequently-flooded areas. The pigments may have an antibacterial and antifungal effect, helping to preserve the wood from rotting in the damp conditions. There are, of course, many, many other trees with red wood but I have tried to restrict this to those that have been compared to blood.

The mineral pigment red ochre or ruddle has been used by humans for a very long time. The earliest reliably-dated finds in human sites are from about 200,000 years ago in both Africa and Europe. Red ochre seems to have been used for a wide variety of purposes from rock paintings to decorating skeletons. Scholars often resort to the "it was religious" argument when they have no evidence for context or other theories for a practice by ancient humans. Some of that use of red ochre may have been religious but it should be noted that modern hunter-gatherers use red ochre for decoration, tanning animal hides and as an insect-repellent. Australians were using red ochre at least 40,000 to 60,000 years ago. There were underground red ochre mines in Australia at least 32,000 years ago. Red ochre continued to be mined from several locations and was traded throughout the history of Australia.

Red ochre is a relatively dull pigment compared to the bright and deep reds seen in many plant dyes. We cannot be sure how long these plant pigments have been used by humans as even the most stable of them tend to break down over thousands of years. We can be sure that these plants caught the eye of ancient humans just as they were used all over the world in large quantities throughout recorded history. The many plants that bleed red blood like a human would have been especially fascinating.

I will be putting up a full article about the dragon-trees Dracaena or Draco (Asparagaceae) in a few months time. While researching that, I accidentally collected a list of plants whose generic names had a reference to dragons. I thought I might as well write them up for no real reason. I have ignored all those that are not currently accepted, and those with dragon-related species names and common names as they are as common as snapdragons. Nothing special to see here, just an aggregated list of stuff I looked up illustrated with other people's photos.

Dracocephalum (Lamiaceae) - dragon-head.
The type specimen Dracocephalum moldavica was named by Linnaeus in 1753. An Asian annual of the mint family. It has large flowers fancied to resemble dragon's heads. It, and other members of the genus, have been called dragon's head. The first time this English name appeared in print was also in 1753 in Chamber's Cyclopaedia. 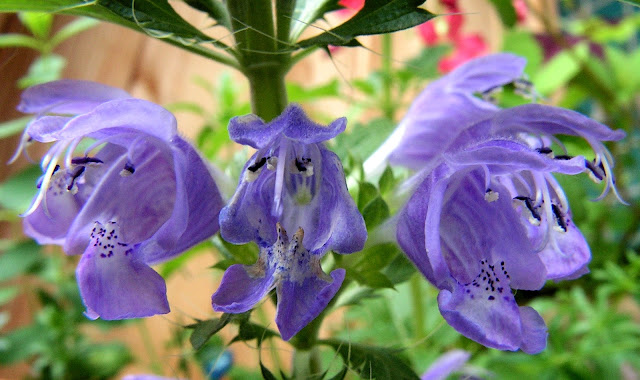 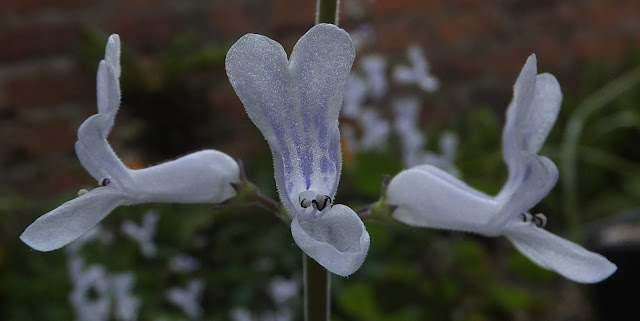 One of the easiest houseplants I have grown. Covered in masses of flowers from May until December.  Leaves mildly aromatic, something like ginger and zonal pelargonium. I keep the plant dry from December to March. I feed with a liquid feed from March to August. I use a well-drained mix of two parts coir compost and one part perlite. It is important to avoid over-watering and waterlogged compost. I keep it on a west-facing windowsill.

Mint Moth and a tiny Magpie 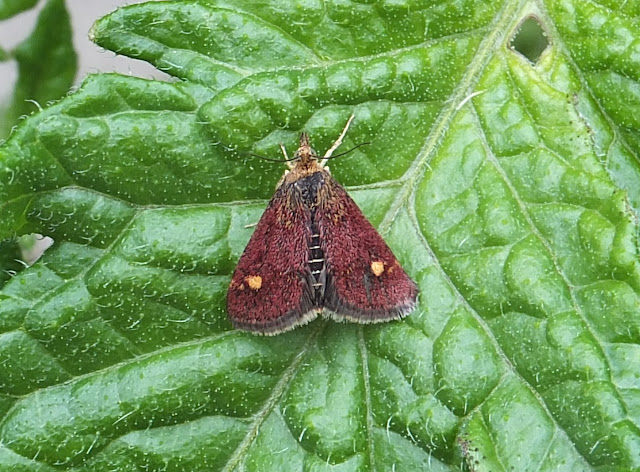 I managed to identify this moth instantly by searching in Google Images for "moth uk maroon two spots". It seems to be the Mint Moth, Pyrausta aurata. It did not move much apart from waggling its antennae before it flew off.