Continued from Part One 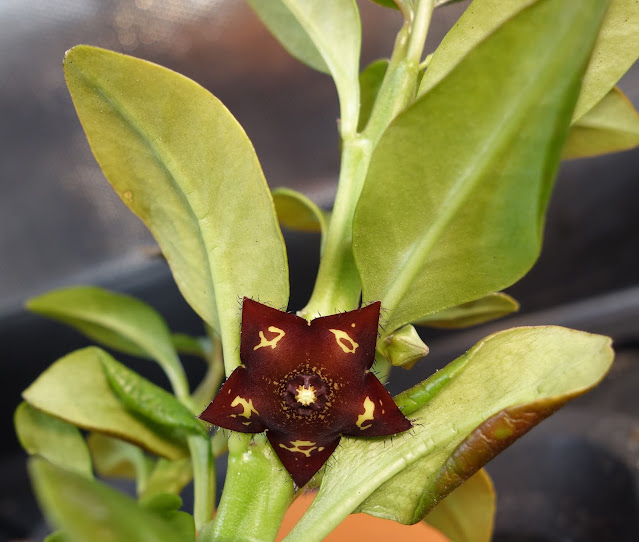 One of my two plants, again. Growing in Manchester.
We don't know whether Shindal Makudi was cultivated deliberately in the region where it now occurs. It is possible that the plant was deliberately introduced to some of the hill forts. It is odd that more than half of the locations where it grows have been associated with old military forts or ancient Buddhist monasteries. A plant that provided both medicine for wounds and an edible vegetable would seem to be useful to have around in a military fort.
Though it is true that many of the high hills in Maharashtra have old hill forts on them.
Read more »
Posted by Pattock at 12/20/2020 12:44:00 pm 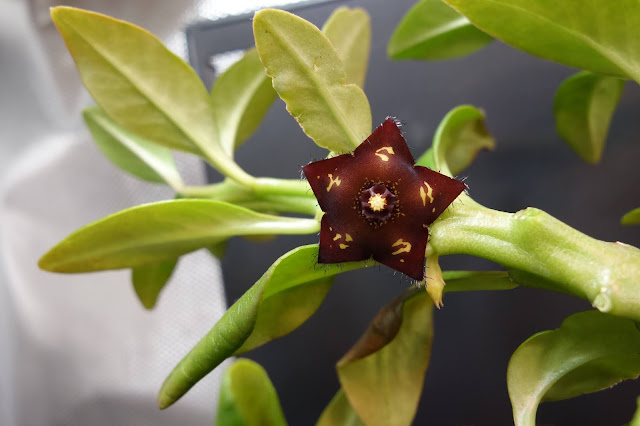 Shindal Makudi is the local Marathi name of an unusual little succulent found wild only in the state of Maharashtra in western India. It is one of the stapeliad group of flowering plants. Stapeliads are a part of a larger group called asclepiads.
The stapeliads are mainly stem-succulents with leaves that are reduced to tiny scales, completely absent or converted into thorns. They have adapted to hot, dry areas and would lose too much water through large leaves. As you can see from these pictures, Shindal Makudi is unique among the stapeliads in having full, large succulent leaves, though only during the very wet monsoon season.
This article is mainly about the social history of the plant. The stories of the locals, plant hunters and growers fascinate me. There will be some of the science as well, of course. However, if you want to dive more deeply into the ecology⁹⁹ ¹⁰⁰, botanical description,⁴⁰ Crassulacean Acid Metabolism⁴⁶ and taxonomy,⁵⁶ I would recommend looking at the articles linked in the References section.
Obviously, this has been a bad year for finding people in their offices and I haven't been able to pop down to my local University library. So, a few things remain as mysteries for now.