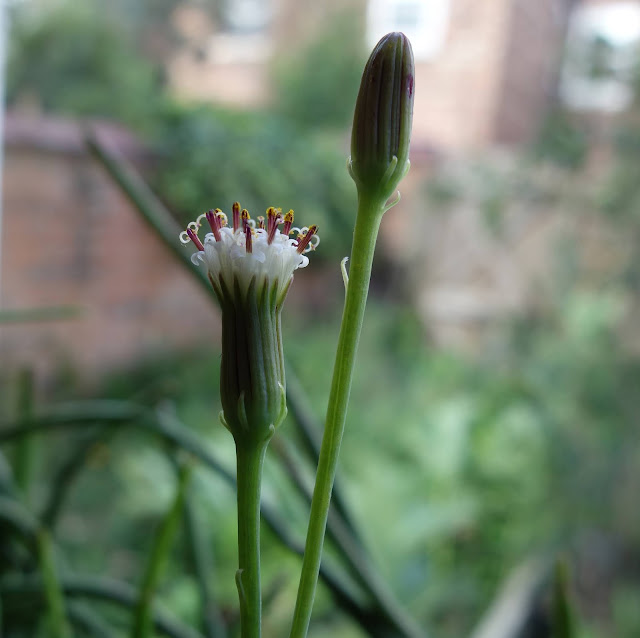 My Curio just flowered. The flower is 12mm (½ inch) across and 22 mm (⅞ inch) tall. They don't flower very often but are widely-grown for their decorative succulent leaves and trailing habit.

The yellow pollen is produced first, by the purple anthers. A day later the stigmas, the white ramshorn-shaped structures with pink tips, burst out of the column of anthers and become ready to receive pollen. If you right-click the photo and select "open image in new tab" (or the equivalent in your application) the photo should be detailed enough to see that. 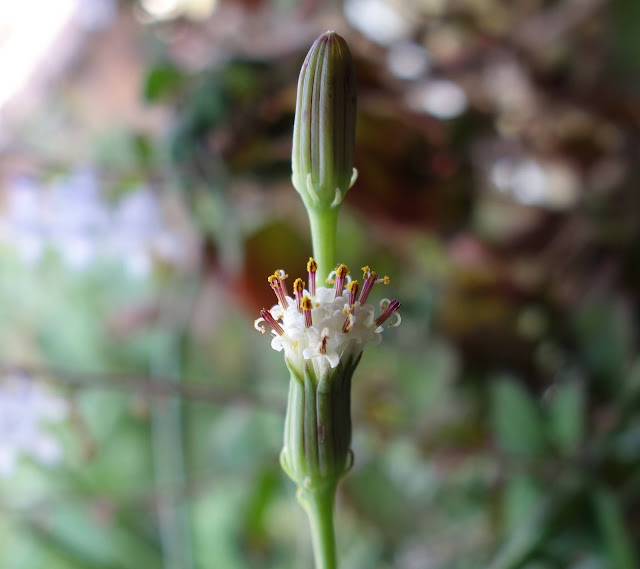 I am not sure which species it is. It may be Curio citriformis, judging from the shape of the leaves. Assuming the citrus referred to by the name is a lemon. It may be a hybrid between one of the other Curio species and the globular-leaved Curio rowleyanus.

This Curio sends out lots of trailing stems. It is often grown in hanging baskets to show off this feature. It is very easy to propagate. The trailing stems put out hopeful roots at every juncture. To get a new plant just cut off a piece of stem. Pin it into the new compost with the root against the surface and water it in. 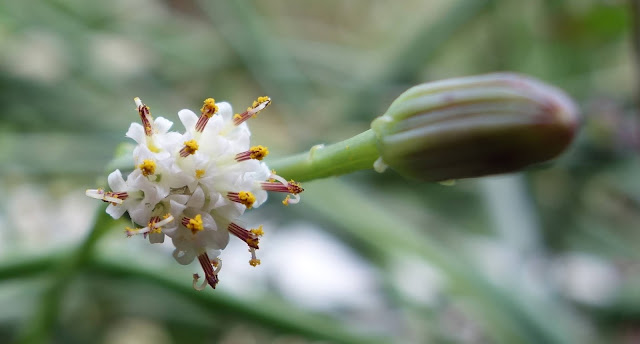 Don't let the compost get waterlogged but do water well in summer and feed it a little. In winter (if you have winter in your house) let it stay a little drier but do water occasionally. They are very tolerant to being left in pots that are too small. They do prefer a well-drained compost and lots of drainage holes in the pot. My plants have been totally pest-free. I would recommend this plant for beginners who have never grown houseplants before as well as those who are more proficient. 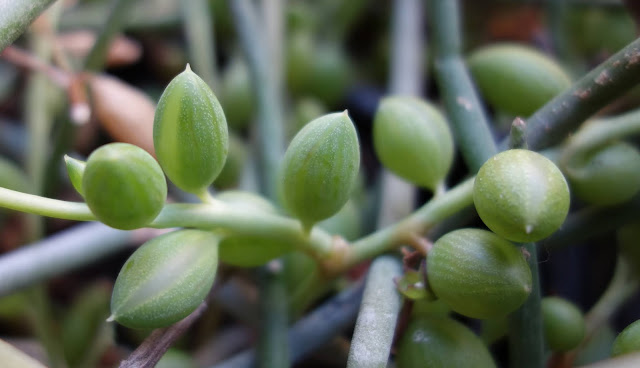 The leaves look lovely but are probably toxic. Most of the senecios and their relatives contain alkaloids that damage the liver. 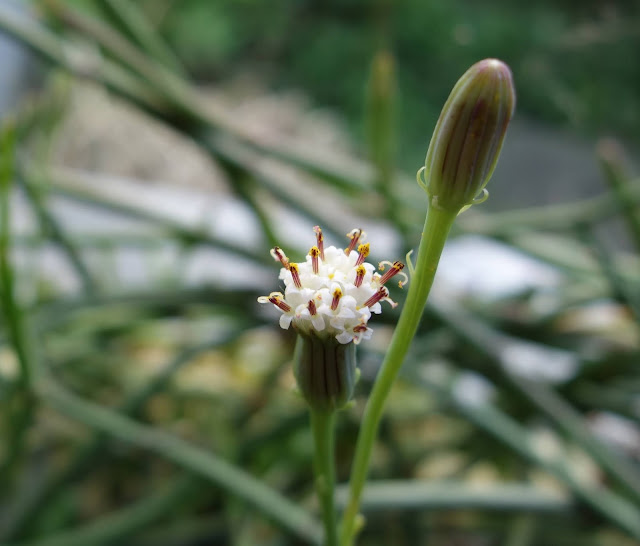 All of the genus Curio have white flowers and succulent leaves and stems. The genus Curio was separated from the huge genus Senecio in 1997 by Paul V. Heath.

You might know Senecio from the common weeds Oxford ragwort and groundsel. There are some garden plants that were in Senecio but most have been placed in smaller genera to try to reduce the monstrous Senecio genus to a manageable size. Kew still recognises 1,587 species of Senecio and have not yet got round to another 1,553 names they need to assess.

Going off-topic for a moment. Oxford ragwort is a widely-despised weed in the UK. However, without it we would not have so many cinnabar moths. The cinnabar moth is one of our most spectacular day-flying moths, gorgeously glossy with scarlet markings on a black background. Most people would assume it was a butterfly. The caterpillar accumulates toxins from the Oxford ragwort to protect itself from predators. The bright yellow and black stripes of the caterpillar and red and black of the adults warns predators that they are poisonous. 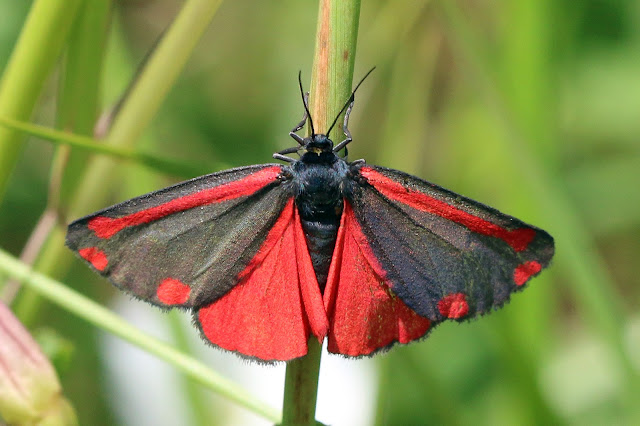 Most gardeners are exasperated about the frequent changes in botanical names. However, I would think that having a group of decorative, easy-to-grow succulents called Curio would be welcomed by most. Even if it does mean writing a new label.

The change of name has been ignored by many people because the journal that published it was obscure and short-lived. The original paper cannot be found on the internet yet. Kew Gardens recognises 18 species of Curio.

Curio are native to Southern Africa. Some groundsels obviously found themselves in a desert and were selected by the heat and drought over the years to become more succulent and adapted to that habitat. 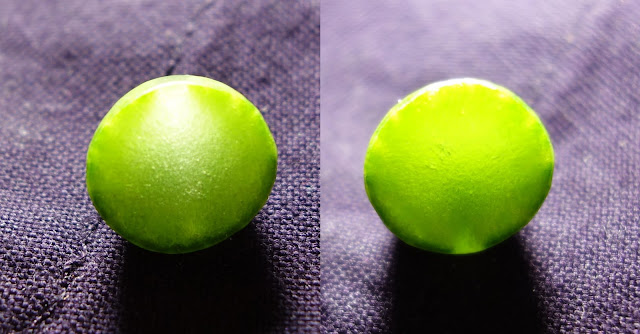 The same cut half of a green leaf in the same illumination from behind.
The window stripe is on the upper side on the left
and the lower side on the right.

You can see the transparent window stripe in the photos of the leaves. This allows the chlorophyll to be protected from the blazing sun. The blue-green leaf surface is quite reflective. 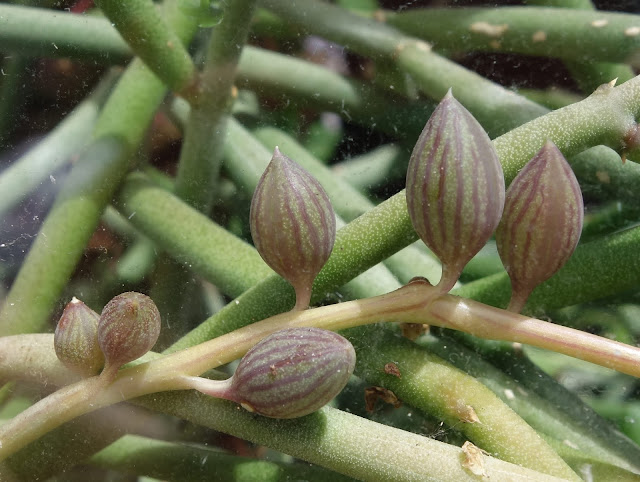 The leaves will also blush with purple stripes to protect themselves when in very strong sun. The plant prefers not to be exposed to full sun even in the UK. This has only happened on my kitchen windowsill this year. It has been a very sunny year in Manchester. The purpling has still only happened on the leaves pressed up against the glass. The picture above has been taken through the slightly grubby and cobwebbed glass. I don't want to disturb the spiders. 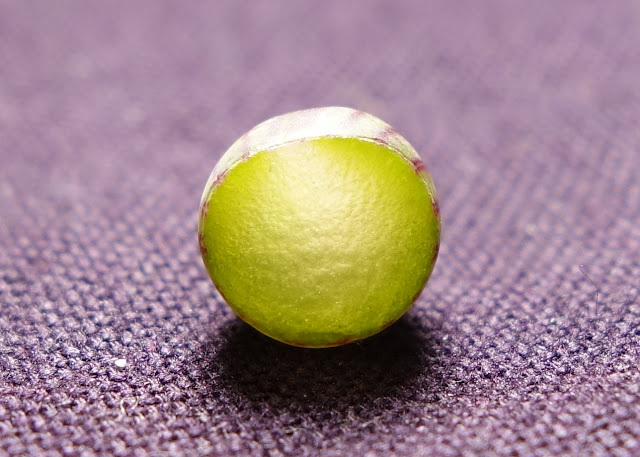 A purple-striped leaf cut in half to show that the stripes are quite superficial.

The thicker stems with tiny scale leaves are another plant with which my Curio is hopelessly entangled, Cynanchum (Sarcostemma) vanlessenii from the Yemen. I am still waiting for that one to flower after six years. Perhaps it will be warmer next year. 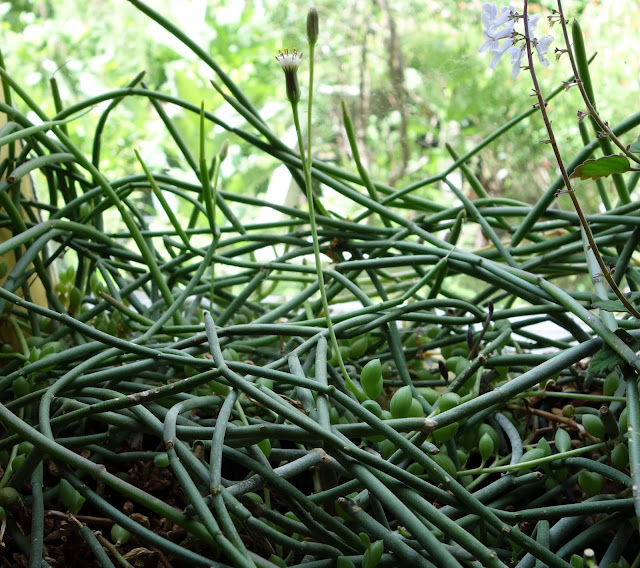 Though the word Curio appears to be Latin, I think the plant name has been taken from the English sense of the word. The OED has the origin as being a simple abbreviation of curiosity, in the sense of "An object of interest; any object valued as curious, rare, or strange." The first known use in print was in 1851 by Herman Melville in a rather long book called Moby-Dick; or, The Whale.

In ancient Latin there was a word curio which meant wasted by sorrow, lean or emaciated. It could also mean the priest of a curia, a sort of ancient Roman (pre-Christian) parish of the city of Rome. Also a crier or herald. Also a Roman surname.

The word curiosus meant both "Bestowing care or pains upon a thing, applying one's self assiduously, careful, diligent, thoughtful, devoted" and "inquiring eagerly or anxiously about a thing, inquiring into, in a good or bad sense; curious, inquisitive".

For those interested in genetics-led taxonomy, there is a detailed paper about the relationships of Curio from 2017 available online called "Curio alliance (Asteraceae: Senecioneae) revisited" by Lyudmila V. Ozerova, Ivan A. Schanzer & Alexander C. Timonin.
Posted by Pattock at 7/05/2020 08:27:00 pm