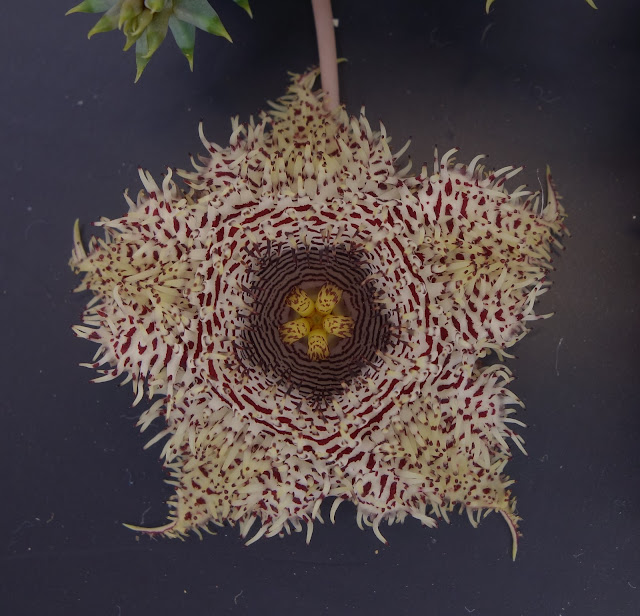 The photo above was taken last Saturday, the first of January 2022. I am immensely pleased that it flowered so soon.

The picture below was taken at about 8pm on the 31st of December 2021, a few minutes after the flower opened. The colours should be the same as the first but I did not get the illumination quite right. The little projections are called "papillae" by botanists. 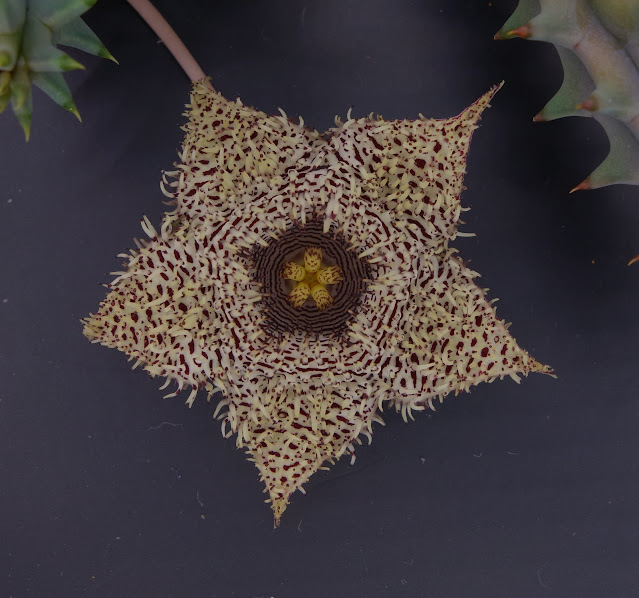 Below is the photo I took of the bud on the 29th of December 2021. From a distance, the bud looked like dead, dry and sun-bleached vegetation. This must be to protect them from herbivores who would like to eat such a tender little delicacy. You can see the reverse of the papillae here, as well as ridges that provide structural support. 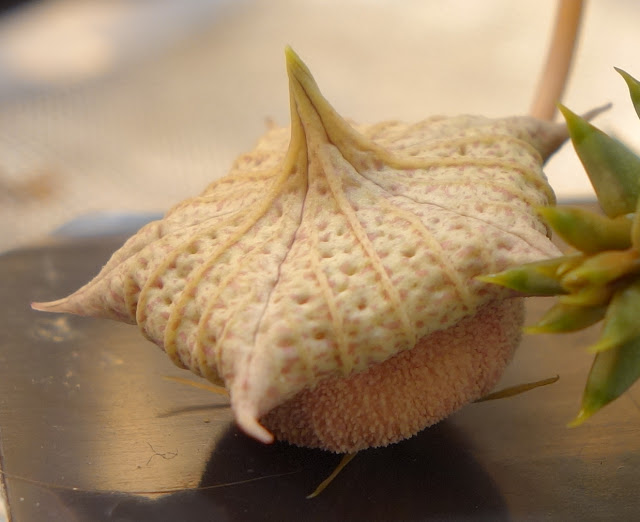 Flowered seven months and 6 days from planting the seed. The seed was from worldwondersgardens on Ebay. £2.95 for 5 seeds. Only one sprouted but that was enough for me. The plant is supposed to be one of the easier stapeliads and I certainly had no problems with it. This is clearly the subspecies Huernia hystrix ssp. hystrix rather than the smaller Huernia hystrix ssp. parvula. The flower is a shade over 5cm (2 inch) across and the flowerstalk is about 7½ cm (3 inch).

The plant is growing in a small controlled environment cabinet with a constant 14 hours of light and 8 hours of dark. It has never known a temperature below 20°C with a maximum last summer of 40°C. The maximum at the moment is 29°C. There are a couple of 4" computer fans, one dragging air in while the lights are on and one moving the air inside the cabinet constantly. Huernia does not need quite as much light as I have in there (8 x 13W Philips household LED lamps for 0.8 square metres). That is why it has blushed a reddish-orange colour in parts, protecting itself from excess light. Some of the other plants do like strong light so I compromised, putting the Huernia further from the lights.

There are lots of tiny buds under the stems and you can see one that is half-developed on the bottom left of the photo. I could not detect any scent from the flower, fair or foul. Many stapeliads have a nasty odour to attract flies but this one does not. 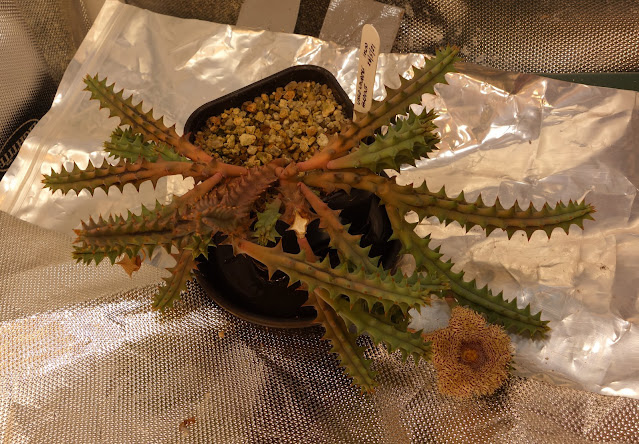 The genus Huernia was named after Justus Heurnius (or van Heurne). Heurnius was a Dutch missionary who visited Cape Town in southern Africa in 1624. He is the first known European to draw a stapeliad from South Africa. That was the plant now known as Orbea variegata. When Johannes Bodaeus Stapelius (or van Stapel) published the drawing it was called Fritillaria crassa promontorii bonæ spei, the "Cape of Good Hope fat fritillary". Spelt Frutillaria in the title but Fritillaria in the text. When Linnaeus came to give the plant a binomial in 1753, he named it after the publisher rather than the discoverer and it was called Stapelia variegata. 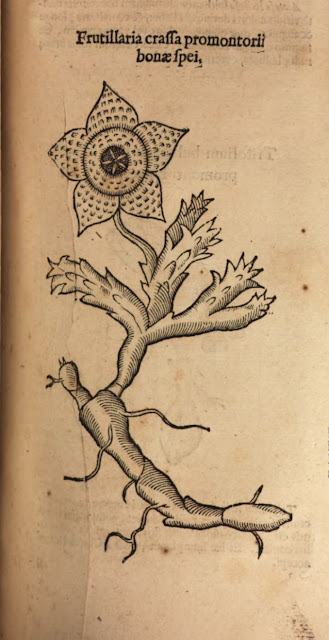 When Robert Brown came to make a new genus in 1810 for Stapelia campanulata, Stapelia guttata and Stapelia venusta, he decided to celebrate Heurnius. Unfortunately, the first publication of the name of the genus Huernia got the spelling wrong. The same article had the name of Justus Heurnius spelt correctly. The genus should have been Heurnia, obviously. Due to botanical naming rules, the bad spelling had to be kept.

I would be surprised if anyone knows how to pronounce it. I say Hw-uhrn-yuh.

Huernia hystrix had been named Stapelia hystrix by Joseph Dalton Hooker when first described in 1869. He gave the English name "Bristly-flowered Stapelia" though in Latin hystrix means "porcupine". The species was renamed in 1876 when NE Brown recognised that it was definitely not a Stapelia but closer to the genus Huernia. 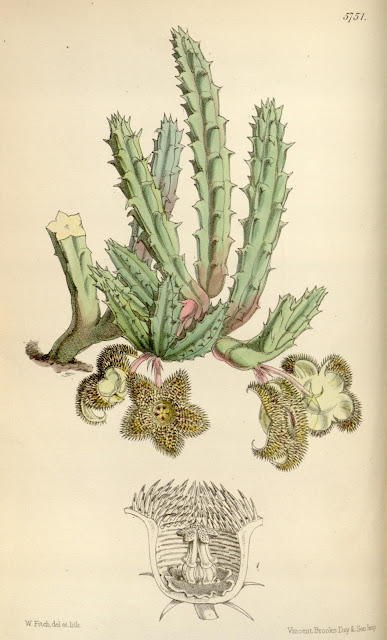 I attempted a similar cutaway to the one in Fitch's illustration above. I must remember to get a sharper blade. All the following photos are of the same flower as above, now 2 days old. As I handled the flower, I tried to find an analogy for the feeling of the papillae/bristles. I couldn't. They are firm but not hard, rounded but fine, a not unpleasant texture but very unfamiliar. 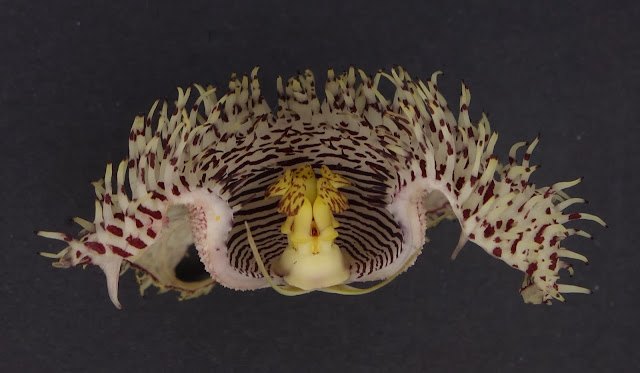 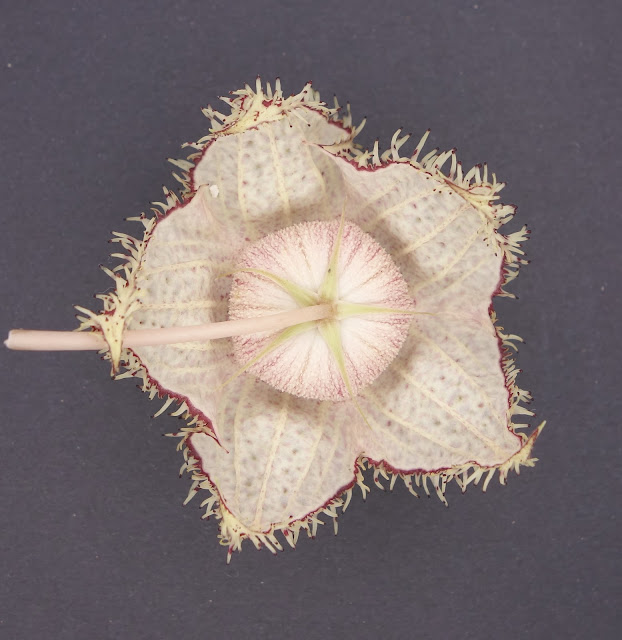 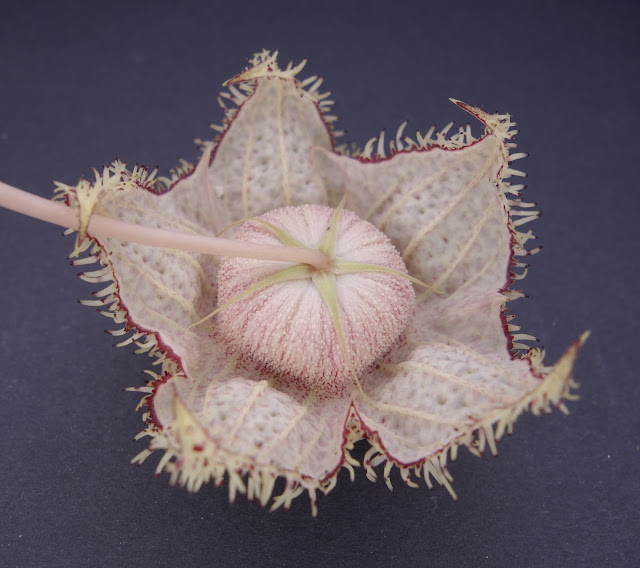 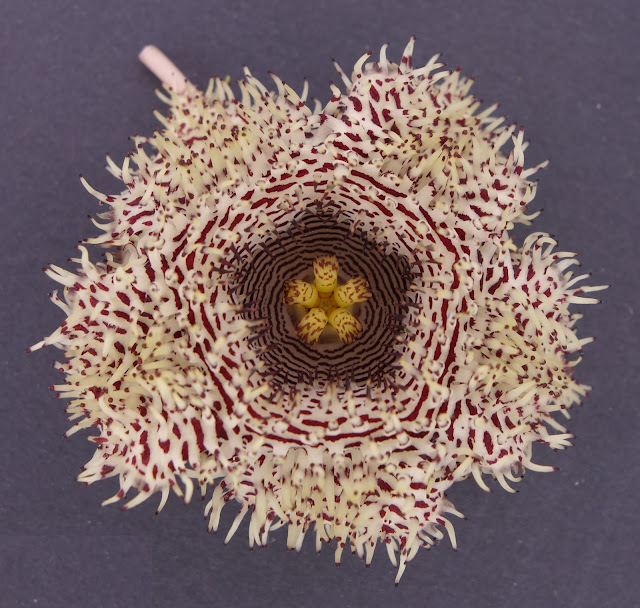