THESE THREE ARTICLES ARE UNFINISHED
I have been distracted by a large project that I put aside in 2014 and am working on that for the next few months. Hopefully I will return to the Dragon's Blood series, tidy these three up and complete the ones about the famous Dragon's Blood trees.

Dalbergia monetaria Spanish palo de brasilete (brasilete being related to the brazilwoods), membrillo. The specific name monetaria comes from the coin-shaped seeds. In Peru the seeds of Dalbergia monetaria have been used to make necklaces. Climbing woody plant, widespread in Central America, northern South America and some islands of the Caribbean. The first botanical description was by Linnaeus in 1781. He records that it produced a red resin like dragon's blood. 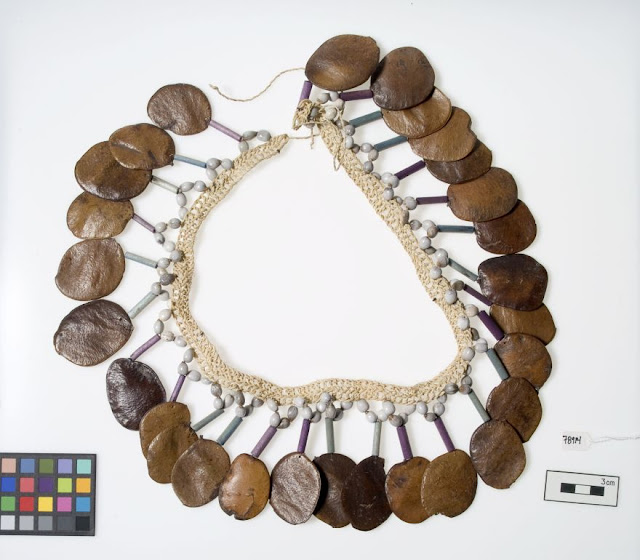 
On the bark of the trunk are found tears of a red gum, transparent, and of a strong astringent taste. 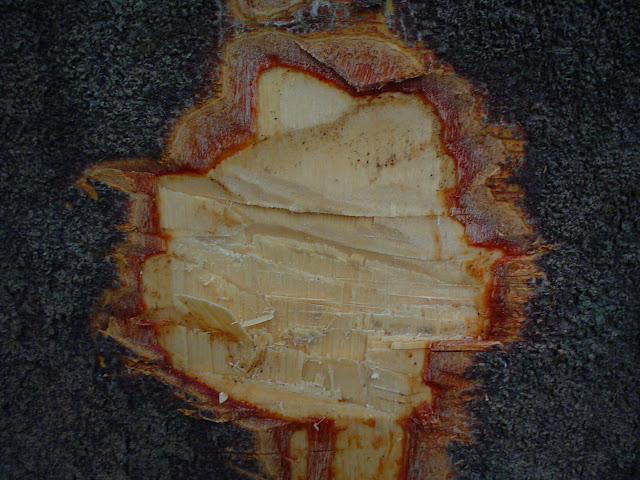 Pterocarpus officinalis (previously called Pterocarpus draco and Pterocarpus belizensis). Bloodwood (Guyana), Corkwood (Guyana Creole), Swamp Caway, cahué, Sangre de drago (Spanish for "dragon's blood"), Palo de sangre (blood-wood), Sangre, Sangregado, Sangregao, Sangrillo and many and varied local names in its extensive range. Found as an abundant and often dominant tree among coastal salt-marsh and mangroves along the Atlantic and Pacific coasts from Mexico to Brazil and Peru, inland in marshy areas and along rivers and on many Caribbean islands.  Hardened "sap" or exudate (some doubt as to whether it is a latex, gum, resin or sap) used for diarrhoea, mouth sores and thrush in NW Guyana.

In 1763 Nikolaus Joseph von Jacquin described the tree and wrote that the resin was no longer traded very much in Europe.

Long ago the resin was frequently sent to Cartagena in Spain but it is now obsolescent in European medical practice; it is perceived that it has no virtue in curing diseases like haemoptysis (spitting of blood). Rarely taken by European traders, collection is neglected by the locals. From the similarity it is called Sangre de Dragon.

In the original Latin:

In 1826 J Smyth Rogers wrote that Pterocarpus draco was only used as a "colouring matter" though formerly supposed to be an astringent.

In Dominica the endemic and vulnerable red-necked parrot Amazona arausiaca eats the fruit of Pterocarpus officinalis. 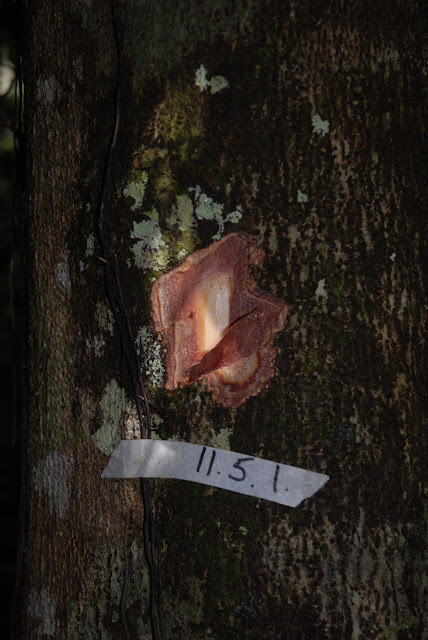 Though these are redwoods they are in a separate section of the pea family from all the others I am writing about on this page. They are in the Detarioideae, the only famous member of which is the tamarind used in Indian cooking. They also produce the variously coloured aromatic resins exuding from wounds, often called copal. Genera of the Detarioideae such as Copaifera, Guibourtia and Hymenaea have all produced copal used as incenses and for industrial production of varnish.

Another coloured wood is also produced by a tree in the Detarioideae. Peltogyne purpurea  Panama: nazareno (Nazarene, like Jesus Christ), morado (purple). Unknown country: Aromio, Azulillo, Nene, Sangre de Cristo (blood of Christ). Wood used for various constructions, furniture, cutlery and luxury coffins. Heartwood starts beige but converts to an intense violet when exposed to light. Turns dark brown on ageing. The blood in the name seems to just be a reference to the purple colour of the heartwood.

The Dialioideae are another very small section of the huge pea and bean family. None of them are famous. 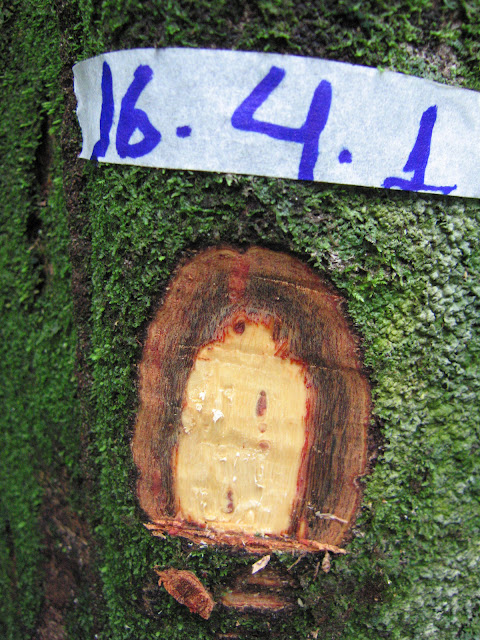 Not to be confused with Dialium guineense, the velvet tamarind found in West and Central Africa. The fruits of Dialium guineense are also eaten and enjoyed across their range in Africa. The distinctions between Guinea and Guyana have caused some confusion to botanists over the years. 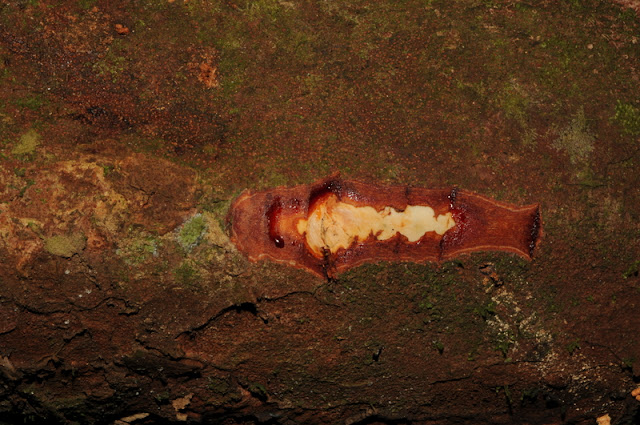 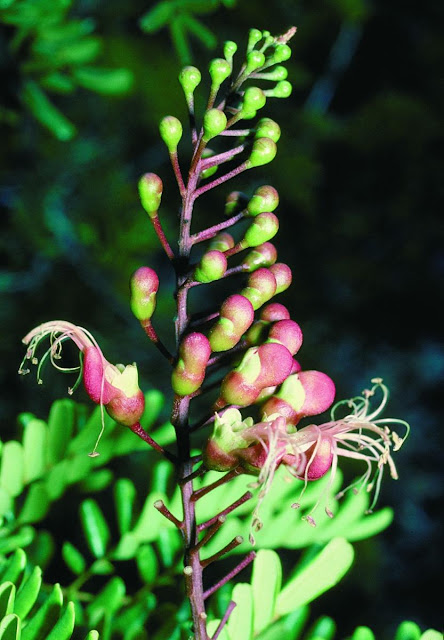 logged extensively in plantation times to make red dye exported to the Bahamas and thence to USA. The wood is boiled in milk to make a pink 'health tonic' 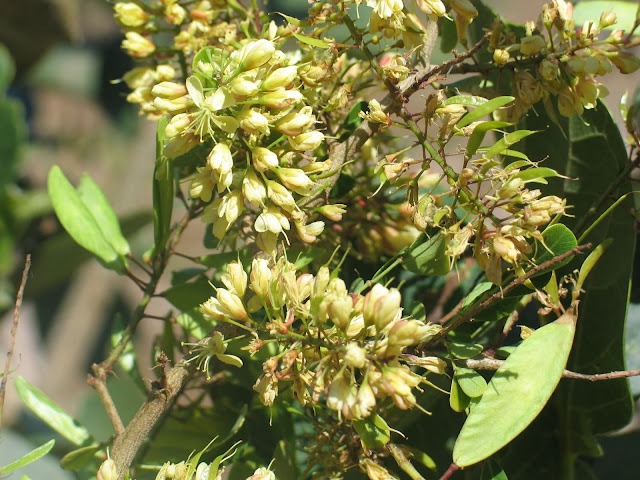 Another bloodwood, which was traded in industrial quantities, is also called logwood or blockwood - Haematoxylum campechianum. As with Vachellia haematoxylon, its name comes from the ancient Greek, αἱματό- haemato- is bloody and -ξύλον -xylon is wood. The wood is source of the purple/blue/black dyestuff and pH indicator haematoxylin. Native to Mexico and Central America but cultivated elsewhere, including Madagascar. A small test tube of logwood was included in the chemistry kit I had as a small child. The dye was first used by the Maya for dyeing cotton and as a medicine against diarrhoea. They called it ek or ek', which simply means "black".

The Aztec dye huitzcuahuitl is usually identified as a Haematoxylum, most likely Haematoxylum brasiletto as it was common across the whole of the land we now call Mexico. Dr. Élodie Dupey García translated a description of its use from Nahuatl into Spanish, which I have translated into English: 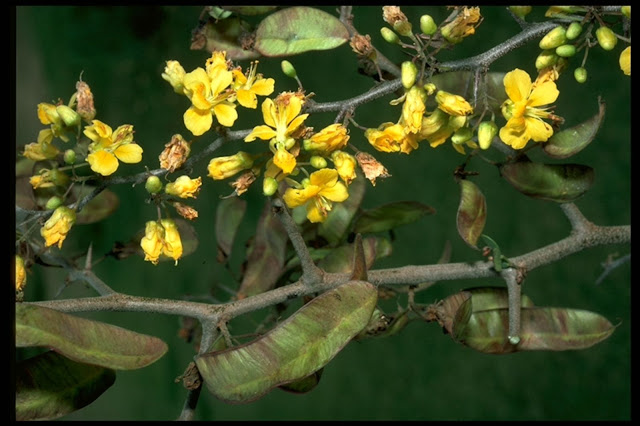 Haematoxylum brasiletto from Central America was called Nicaragua wood and was regarded as a superior dye to logwood, according to the OED. Later called hypernic, meaning hyper-nicaragua wood, presumably as an advertising gimmick. Picture:  The trade in logwood probably carried many different species of South and Central American red dye woods. Logwood can still be found on sale for use as natural dyes.

The logwood trade became so important that Queen Elizabeth issued a statute against the importation into Britain in 1567. This was because the cloth faded quickly, according to the statute. It may have been to protect British dye-plant farmers. This statute was revoked by an Act of Charles II in 1662. The reason given in the Act was that English dyers had now learned the art of dyeing with logwood to produce a fast, long-lasting colour. It may have been more to do with the British now owning various Caribbean islands that produced logwood.

Logwood cutting in the British Honduras was a miserable business. The trees generally grew in swamps. The logwood stands were a major destination for enslaved people stolen by the British from Africa. They were treated as badly as any slaves in the "New World", even without the malaria and alligators found in the swamps. The privateer (pirate with British government license) William Dampier described the preparation of the wood and the other types of red dye-wood he had encountered.

When one privateer returned to London with a shipload of logwood stolen from the Spanish he discovered it was worth a hundred pounds per ton. The crew were shocked by this as they had been cooking their food on the voyage home by burning the logwood in the galley stove. The colony on the Honduras alone exported between 4,000 and 13,000 tons per year in the 19th century. In 1850 Great Britain imported a total of 30,190 tons of logwood.

Haematoxylum brasiletto wood has been used for medicine in both Mexico and Cuba. 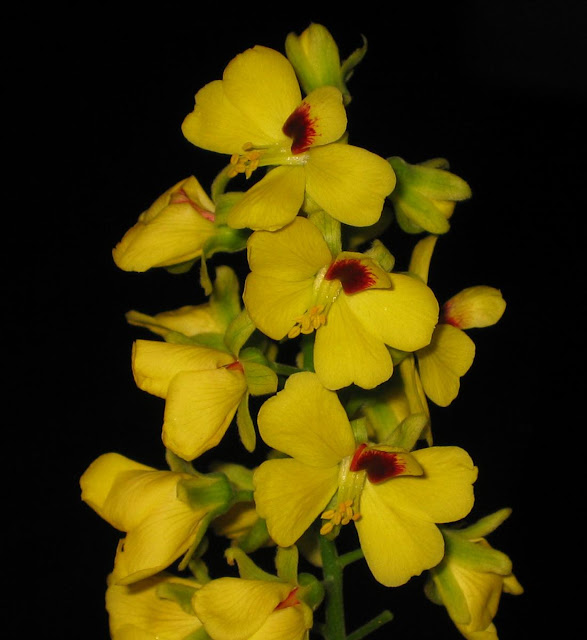 Paubrasilia echinata (previously Caesalpinia echinata) was found in abundance when Europeans invaded the east coast of South America in 1500. Unlike many of the red-woods that live in swamps, but like the Indian Biancaea sappan, it favours dry, chalky or sandy soils.

Paubrasilia echinata was found to provide a similar but much superior dye to the Asian brazilwood/sappanwood. In the trade this dye has been called Pernambuco wood and peachwood, as well as many local names. The Tupi name was ibirapitanga, which means wood-red. The powdered wood can still be found on sale for dyers who use natural dyes.

It also took the name of the famous red dye wood from Asia, pau brasil in Portuguese (see Biancaea sappan in my article on Asian bloody beans). The tree then gave its stolen name to the whole country. Terra de Santa Cruz (land of the Holy Cross) became Terra do Brasil became the República Federativa do Brasil and is now known to most English speakers simply as Brazil.

The Portuguese crown gave the first contract for exploitation of brazilwood in 1501. There have been spirited arguments that the name of the country came from the Irish legend of the island of Hy Brasil, from the Irish Uí Breasail. They do not appear to be related. The legend of Hy Brasil probably derived from the Roman myth of the insulæ fortunatæ, the Blessed Isles. That myth was probably based on the tales told of the Canary Islands. Coincidentally, about 2,000 years ago the Mauretanians probably harvested and processed orchil, a red/purple/violet dye, from lichens from a group of islands in the Canaries called the Purpuriæ, the purple ones.

The change from Asian brazilwood to South and Central American brazilwood and logwood in the 16th century has been credited with increasing political and commercial tensions between the five European nations who were invading the Americas (Britain, France, Portugal, Spain and the Netherlands). The harvesting of wild dyewoods and the associated trade in enslaved people was earlier by some decades than the silver and sugar-cane exploitation that are usually associated with the European's first bloodthirsty abuse of captured Africans.

Paubrasilia echinata wood was chosen by Francois Xavier Tourte when he developed the modern violin bow in 1785-1790 in France. The wood was known as Pernambuco and Tourte obviously recognised its ideal qualities for a musical instrument. As with the padauk wood (Pterocarpus soyauxii) used in xylophones that I described in my article on African Bloody Beans, the high pigment content of the wood prevents damping of vibrations and leads to a much better, sustained note. The vibration loss in spruce wood can be reduced by infusing the wood with a pigment extract of brazilwood. Of course, a bow made from brazilwood also looks rather lovely.

Some natives of what we now call Brazil called their home
Pindorama, the land of palm-trees. 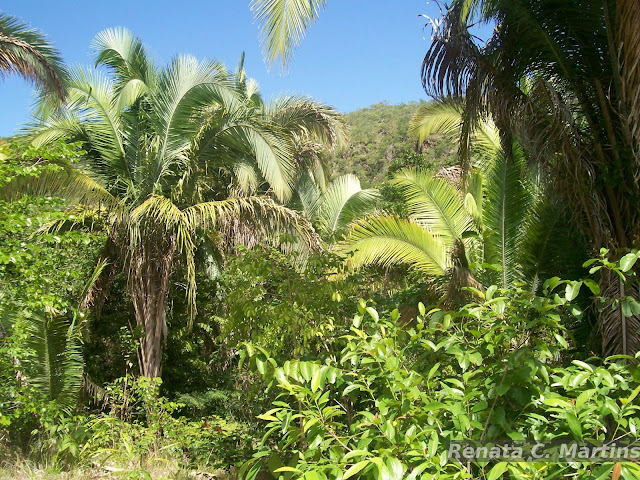 There are many other useful palms across Brazil but the babassu palm is a common, widespread and often predominant tree in Brazilian forests. They grow to 20 metres (65 feet) tall. The babassu nuts provide large quanitites of edible oil good for frying and all culinary uses. The nut is also used as a milk or flour. The tender growing buds are eaten (as palm hearts) and made into juice. The sap can be made into wine. The leaf and stalk are used as building materials, for thatch and for making furniture. The shell of the nut provides high quality charcoal. Ash from the wood has been used to make a salt substitute. The fibres of the leaf are used for making handicrafts.