The origin of the name Ceropegia

Linnaeus named⁹ the genus Ceropegia in 1737 in his Genera plantarum.  Linnaeus referred to the description and picture of a plant in the Horti Malabarici as the plant for which the genus was created. In 1753 he named this as Ceropegia candelabrum. 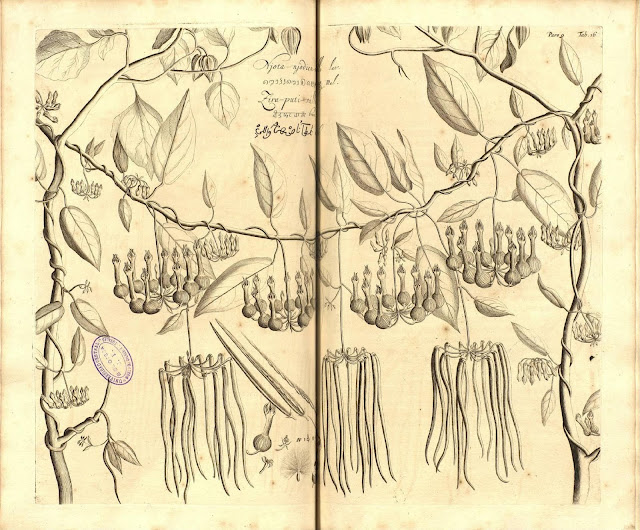 Downloaded¹³ from the Biodiversity Heritage Library.
Open in a new tab to enlarge.

Above we have the iconotype of the Indian plant that Linnaeus named as Ceropegia candelabrum in 1753, as depicted¹³ in the Horti Malabarici of Henricum Rhede (or Reede) tot Drakestein published in 1689. The candelabrum bit gives it away when you see the way the flowers are arranged. Of course, some of you born after the invention of electric light may not have seen any candelabra or chandeliers.

There have been two possible explanations of the origin of the word Ceropegia. Linnaeus never explained it, as far as I know.

The earliest explanation I can find is from 1793. In the first volume¹² of Philipp Andreas Nemnich's Allgemeines Polyglotten-Lexicon der Naturgeschichte mit erklaerenden Anmerkungen (General Polyglot-Lexicon of Natural History with explanatory Remarks), he writes about Ceropegia:

The general name for Ceropegia in German was given as Der Leuchter, which means "chandelier" or "candlestick". In French le candelabre. In Dutch Kaarskroon, "candle-crown". In Danish lysestagen and Swedish ljusstaken, both meaning "candlestick".

In 1810, the fourth volume of the Encyclopædia Londinensis had the origin of Ceropegia as:

The only dictionary I could find that had the word keropegion is a Greek to Latin dictionary that is regarded as the most complete of all Ancient Greek dictionaries. The Thesauri linguæ Græcæ by Henrico Stephano (aka Henr. Stephanus, Henri Estienne or Henri Etienne) was first published in 1572. Dictionary entries for Ancient Greek words fill 3,165 pages in the first three volumes and further information on the Greek language fills 997 pages of the fourth volume.

The word keropegion is in the second¹⁴ of the four volumes. There are no examples given of its use in manuscripts. The Thesauri linguæ Græcæ would have been the standard work for those students who wanted to learn proper Ancient Greek from its publication in the 16th century on to the 19th century, well after the time of Linnaeus. Linnaeus certainly knew it and probably owned it. I emailed the Linnean Society of London to see if they had his copy. They kindly answered, noting that the Linnean collections they received had none of his reference works - "In fact the absence of general reference works from the collection is a curiosity: no dictionaries, thesauri, or word lists (except those contained in larger works, or written by Linnaeus himself)." They suggested that I email Uppsala University Library. A librarian there kindly replied today (19/7/2021). They have no Greek dictionaries of any kind in their collection of personal books owned by Linnaeus. However, they have had a copy of the Thesauri linguæ Græcæ in the University Library since before 1650. Linnaeus would have had access to that copy, as he became a student at Uppsala University in 1728.

The complete entry for the word is:

Keropegion, Candlestick, where candles are driven in.

So, the first species named appears to be called "candlestick candelabrum" - Ceropegia candelabrum. 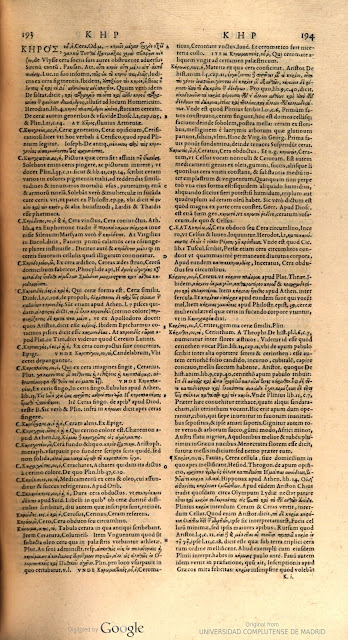 Κηροπήγɩον can be found in the seventh paragraph of the first column.
Thesauri linguæ Græcæ by Henrico Stephano (1572)
Downloaded¹⁴ from the Hathi Trust

The name of Ceropegia has also been said to be from Ancient Greek: κηρός - bees-wax or wax-taper and πηγή - a spring or fountain. Therefore, the name has often been translated as "wax-fountain". Both these words are also found⁶ in Latin, as cera for wax and pege for fountain. This often strikes the reader as rather odd. The first example of this explanation I have found was from 1830.

In 1830 the description⁴ of Ceropegia elegans in Curtis's Botanical Magazine included:

* From κηρός, wax, and πηγή, a fountain, in allusion to the delicate, waxy umbels of some species.

In the description⁸ of the same plant in Edwards's Botanical Register in 1835 the explanation was different:

* From κηροπήγɩον a candlestick, in allusion to the resemblance borne by the corollas of some species to the branch of an antique candelabra. 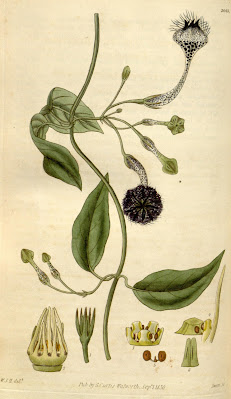 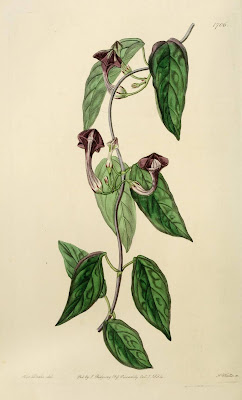 However, in 1834 Curtis's Botanical Magazine had the other etymology of Ceropegia in the description⁵ for Ceropegia lushii. It was clearly based on that from the Encyclopædia Londinensis of 1810.

The Genus Ceropegia is peculiar to the East Indies, and is remarkable for the peculiar shape of its flowers, frequently arranged in umbels, hence its name κηροπηγɩον, a candelabrum, or lamp-stand.

Both the descriptions in Curtis's Botanical Magazine are credited to William Jackson Hooker. Presumably, he found the better explanation sometime in those four years. Unfortunately, the wax-fountain explanation seems to have had more legs in the long run. The translation as wax-fountain has been repeated as gospel in many places ever since.

The Wikipedia page for Ceropegia today has:

It was named by Carl Linnaeus, who first described this genus in volume 1 of his Species plantarum, which appeared in 1753. Linnaeus thought that the flowers looked like a fountain of wax. From this the scientific name was derived: kērós meaning wax and pēgḗ meaning fountain (Pooley, 1998).

I assume that the reference is to A Field Guide to Wild Flowers Kwazulu-Natal and the Eastern Region by Elsa Pooley which was published in 1998. I am told Pooley does not give a reference for the statement.

Once I have finished this article I will be updating (backdating?) Wikipedia.

Linnaeus did not define any of the members of the genus Ceropegia until 1747 when he described¹⁰ "Ceropegia pedunculis bifloris" and "Ceropegia umbellis pendulis, floribus erectis" in his Flora zeylanica.  He did not finalise his binomial system until the publication of his Species plantarum, simplifying the names to two words for each plant - genus and species. In 1753, in the first volume of the Species plantarum he coined¹¹ the names Ceropegia candelabrum for "Ceropegia umbellis pendulis, floribus erectis" and Ceropegia biflora for "Ceropegia pedunculis bifloris".

This article is entirely due my listening to a programme on BBC Radio 4 last Tuesday. It was a reading² of an abridged version of The Madman's Library by Edward Brooke-Hitching.  From that programme, I learnt the word bibliopegy, a posh word for bookbinding. The ending -pegy is from a Greek word which also ends naupegy - shipbuilding, directly from the Greek naupegia ναυπηγία. As I did, many will have missed this word as a possible root for Ceropegia as the verb is quite different - pegnumi (πήγνυμι). My complete ignorance of Greek does not help, of course. The verb appears⁷ quite irregular as peksis πῆξις is also derived from it.

Of course, the word keropegion Κηροπήγɩον itself is hopelessly obscure and rare in Greek. Naupegy is obsolete and rare in English, according to the Oxford English Dictionary which only has one quotation from 1570 to illustrate the word.

The verb pegnumi seems⁷ to have a range of meanings:

stick or fix on, impale

fix upon an object

fasten [different parts] together, fit together, build (this is the sense in bibliopegy and naupegy)

to be joined or put together

to be petrified, struck dumb

fix or determine something.

anything fastened or joined together, framework, of a ship, of a roof

stage or scaffold used in theatres

The Greek word keros κηρός means⁷ both beeswax and a wax-taper/candle. So, somewhere in that spectrum you might see that keropegion  is a combination of words that can be translated as candlestick, candle-fitting, candle-fixing, candle-impaler or candle-framework. Or just candelabrum.

I used to have a rather spectacular Ceropegia crassifolia (now Ceropegia brachyceras?) from southern Africa. I grew it from seed from the now-defunct International Asclepiad Society. Unfortunately, I lost it about five or six years ago. Though I would not have any room left for other plants by now if it had carried on growing the way it was. 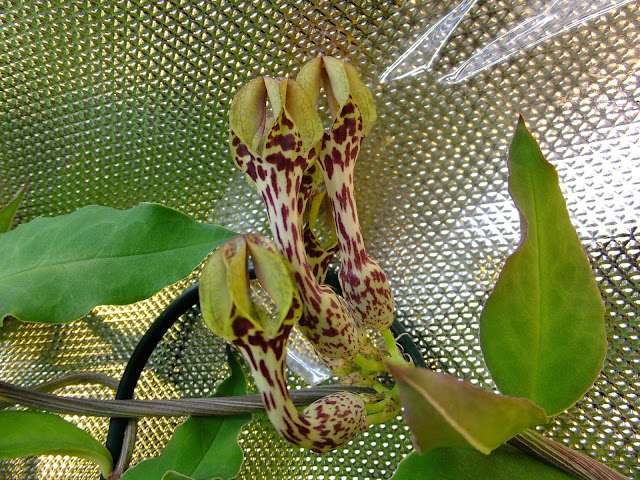 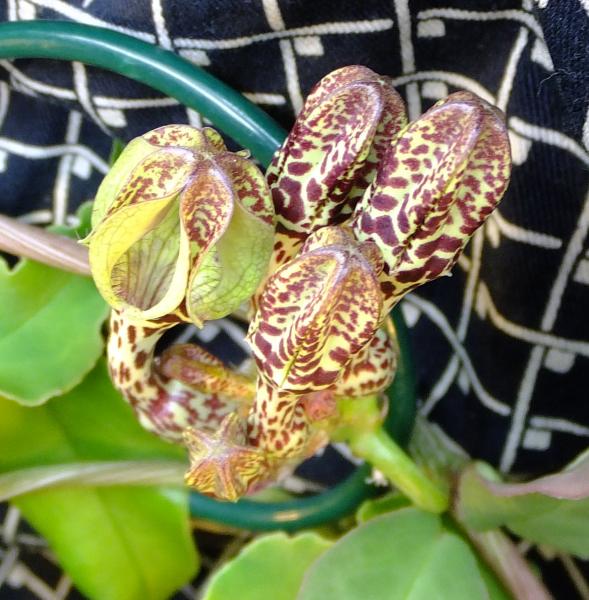 The only Ceropegia I have at the moment is a six week old seedling of Ceropegia bulbosa from India. Now in a 9cm (3½ inch) square pot: 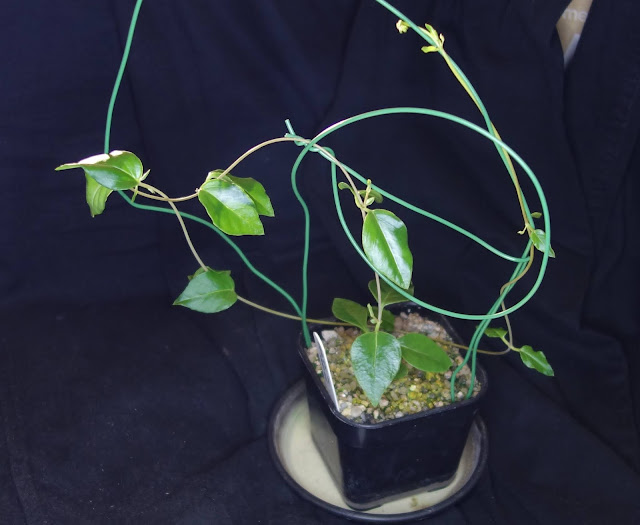 There are other mentions of wax fountains in old books. One was used in beekeeping³ to pour molten wax in producing waxed foundation plates as a base for bees to build the honeycomb.

Another wax fountain mentioned in old books¹ appears to be an artistic waxwork representing a fountain. A search on the internet shows that such artistic objects are still sold as ornaments.

A tiny sample of more authors who repeated the explanation as wax-fountain.