The origin of the name Caralluma 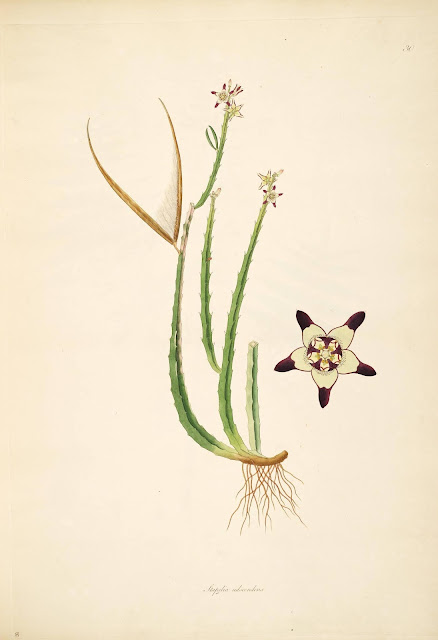 Stapelia adscendens, from Plants of the Coast of Coromandel ¹
Picture file from the BHL Pro Flickr albums.

What is the origin of the name of the genus Caralluma? In short, we don't know. That will not stop me writing about it.

First, I will quote from Wikipedia. I wrote this part of the entry, so I think that it is allowable.

In 1795 William Roxburgh published the name Stapelia adscendens for a plant found in India. He commented that the name for the plant in the Telugu language was Car-allum and that the succulent branches are edible raw, though bitter and salty.¹ The name Caralluma was coined by Robert Brown for a new genus in an article published in 1811. At the time he only described one species in the genus, the plant that he renamed Caralluma adscendens.²

In 1996 Helmut Genaust published the suggestion that it was sensible to conclude that the generic name is derived from the Arabic phrase qahr al-luhum, meaning "wound in the flesh" or "abscess," referring to the floral odour. Genaust was unaware that the genus Caralluma existed east of Palestine. He specifically ruled out its existence in India, where it was first described and named. Genaust presumed that the name would have first been applied to Caralluma europaea in North Africa.³

So, it is clear that the name is from the Telugu language from southern India, but what does it mean? Neither Roxburgh nor Brown seem to have recorded that and did not give the spelling in Telugu script.

From internet searches it seems that the usual Telugu name is now కుందేటి కొమ్ము kundēṭi kom'mu meaning "rabbit horn". This is like the Marathi name for this and related plants - माकड शिंग Mākaḍa śiṅga - "monkey horn". This is, presumably, in reference to the twin curved seedpods, as seen in the painting at the top of this article.

The Telugu communities who used the name Car-allum may have dispersed, perhaps moving to the nearby city of Chennai which now has a population of 7 million people.

In Walter Elliot's Flora Andhrica,⁴ the author considered that Roxburgh must have been mistaken about the Telugu name of the plant.

Allam is "ginger" Káru allam "wild ginger." This is evidently a misnomer of Roxb, which has been perpetuated by R. Brown, who has formed his genus on Roxb's mistake - see next word.

This name is universally known in the hilly parts of the Circars -- It is also applied to other wild species.

It may seem a little odd to call Caralluma by a name meaning "wild green ginger". This may depend on the local classification of types of plants. Caralluma is not hot, pungent or gingery nor related to the well-known ginger plants. However, Caralluma has a strong, bitter taste and is regarded as a useful medicine. The stems are also fleshy, juicy and knobbly, as are ginger rhizomes.

A Telugu-English Dictionary also has the word కరాళము meaning "backbone".⁵ Transliterated by both Charles Philip Brown and Google Translate to Karāḷamu. The Flowers of India website⁶ has Caralluma fimbriata (sometimes still regarded as a subspecies of Caralluma adscendens) as kaarallamu in Telugu.

The publicity for Ayushya Caralluma fimbriata capsules has kaarallamu transliterated as కారాళ్ళము but they warn against trusting anything they have written. Google Translate transliterates this as Kārāḷḷamu. However, Google does not find this word anywhere on the internet.

I am avoiding using the word spine because that would cause some confusion with thorns and prickles. The curvature and knobbly surface of the succulent stems of Caralluma adscendens could, in my opinion, easily be compared to a collection of human backbones.

The shape of the plant can be seen clearly in this video of an Indian man collecting a snack.